Of course, it’s not up to us to prove who is in the casket, Betty Dorsett Duke has already proven who it wasn’t.  Jesse James was at his funeral but he wasn’t dead.  The funeral photo, courtesy of the Phillips Collection, provides more proof that Jesse James lived & died in Texas at the age of 97. Jesse James attended his own funeral

For just over two decades my mother, Betty Dorsett Duke; had researched her family story in an effort to determine whether or not her great grandfather was truly the Old West outlaw, Jesse Woodson James; who faked his death and lived to the age of 97 in Blevins, Texas under the alias James Lafayette Courtney.  Several forensic photographic experts had verified that her family photos matched historically accepted photos of Jesse James, Jesse’s mother Zerelda, Jesse’s stepfather Dr. Reuben Samuel and other family members.  Evidence was found in census records, birth certificates, newspaper articles from the time, countless books and other sources including Betty’s great grandfather’s diary in which he signed his name Jesse James.  She even proved that the 1995 exhumation of the alleged grave of Jesse James in Kearney, Missouri, led by professor James Starrs; was tainted and proved nothing.

But, of all her discoveries in her search for truth, one of the discoveries that made her happiest was the photo she liked to call “the eBay photo” which clearly showed her great grandfather Jesse James sitting in his yard in Blevins, Texas next to Annie Ralston and Frank James along with several known family members and close friends standing behind them.’   It was truly an amazing find.

Recently my sister, Teresa Duke, discovered a photo that would have made our mother proud.  This photo (courtesy of The Phillips Collection) is titled:  Jesse James Funeral and it shows exactly what my mother Betty Dorsett Duke, has been saying all these years: “Jesse James attended his own funeral” and “Wood Hite (Jesse’s cousin) was the one who was killed and passed off as Jesse.”

I contacted the agent of The Phillips Collection and he was very kind and graciously gave me permission to post the photo with the provision that I list who he and his team believe some of the people in the photo are and then I will list who my family and others believe they are.  So, I will post the photo with his identities first and I will follow that with the photo listing the identities which we believe to be correct.  Below those I will go into more detail with photo comparisons so as to show why we believe as we do.

Now for the corrected version of the photo: 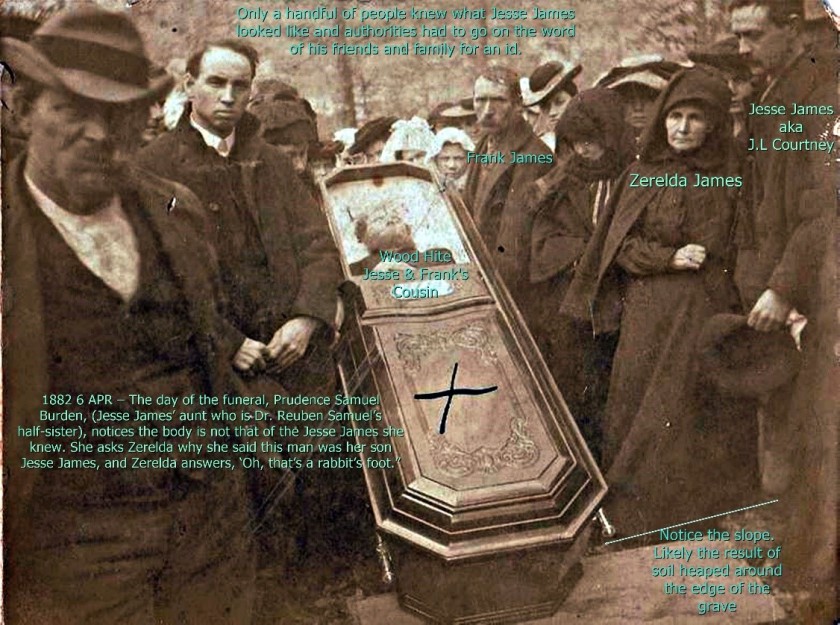 Now for the comparisons:

First, I would like to point out that we believe, as do many historians; that Zerelda was 6 feet tall.  It’s been well documented.  At first glance she does appear to be shorter than those around her but if you will notice the ground on which they are standing, it appears to be sloped which is likely the result of soil heaped around the grave.  Jesse’s feet appear to be somewhere between 6 to 8 inches higher than Zerelda’s.  Jesse was over 6 feet tall (which has also been well documented).

Our team agrees with the Phillips Collection team in regards to the identities of Frank James and Zerelda James Samuel, so there’s no need in my opinion to show their comparisons at this time.  So I will get to the comparisons of the two stars of this photo:  Jesse James and Wood Hite.

For the first photo comparison I’ll start with Jesse James.

Notice the hair, the shape of his eyes and nose and the high forehead.  He has a beard in the funeral photo and of course, he’s younger in the photo to the left but we believe it is Wood Hite in the casket.

Of course, it’s not up to us to prove who is in the casket, Betty Dorsett Duke has already proven who it wasn’t.  Jesse James was at his funeral but he wasn’t dead.  The funeral photo, courtesy of the Phillips Collection, provides more proof that Jesse James lived & died in Texas at the age of 97.

The Truth about America's most famous 'Old West' Outlaw, Jesse James. Jesse tried to fake his death in 1879 and it didn't work too well, but in 1882 he turned an unfortunate turn of events to his favor and lived the rest of his life on a farm in Blevins, Texas. View all posts by Jesse

This site uses Akismet to reduce spam. Learn how your comment data is processed.